The importance of regular oil changes

Servicing your car regularly IS IMPORTANT if you don’t want your engine to seize up and get wrecked. Some people think it’s possible to get away with topping up the oil, without changing it, and without servicing their car regularly. This definitely does not save money in the long run.

Unchanged, dirty oil in your cars engine is like having high cholesterol levels in your blood clogging up your arteries. The longer the oil stays in the engine, the more deposits are left in the oil galleries and on other components. The oil sticks there as it degenerates, getting stickier, thicker, full of contaminants, and in the end blocks the oil galleries so much that they can no longer feed oil to the parts of the engine which need it. If this goes on long enough, your engine basically seizes up, has a heart attack and dies.

Every year we have some customers who have gone too long between services and we end up pulling the sumps of their engines because the oil pick-up strainer is blocked by sludgy, dirty oil. Sometimes we do manage to save their engines by removing the sump etc and cleaning the oil pick up which has become blocked. But other times it’s too late and the engine needs to be replaced, which often costs a few thousand dollars.

The photo below is the inside of a camshaft cover in a car which hadn’t been serviced or had the oil changed for over 30,000 km. When I initially went to change the oil in this car, it wouldn’t even allow me to pour the oil in to refill it because it was all so clogged up by sludge. So I had to open it up, and this is what it looked like. Yuck.

This is what it looked like in the cylinder heads. You can see how the oil sludge is building up on components and sticking there. Once an engine gets like this and the sludge starts to dissolve, it can block the oil pick up and sump and stop oil pumping around the engine, which then causes the engine to seize even though the oil level may be correct. 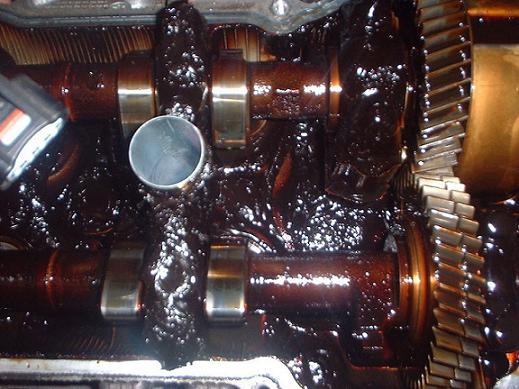 Your car is usually your second biggest financial investment after your house. It amazes me how people have near new cars, and are too busy to service them regularly and are ruining their good car, and shortening its life expectancy. Cars which aren’t serviced aren’t reliable for more reasons than one.